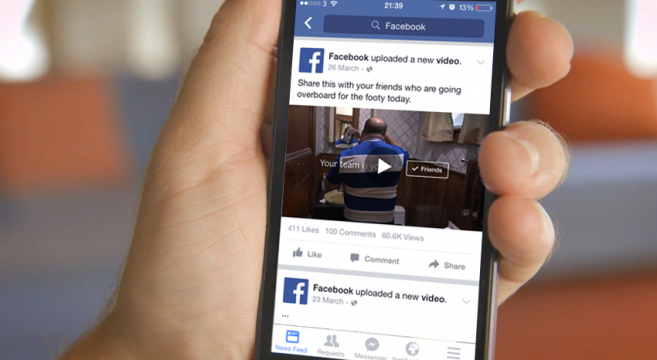 Facebook now allows you stream videos from your mobile devices or PC to your TV through Apple TV from an iOS devise and Google Chromecast through a web browser.

The social media giant is also working to enable people cast from their Android devices to Chromecast soon.

Facebook is focused on creating video experiences that people want, and have also heard that people want different options for how and where they watch videos that they discover on the platform.

To watch a video from Facebook on your TV:

• Find a video you want to watch on your phone or desktop and press the TV symbol in the top right corner.
• Select the device you want the video to stream to.
• Enjoy the video right from your TV. While you’re watching a Facebook video on your TV,

CHECK:  Do You Know That Google Tracks All Your Movement? — Check out How!

you can go back and scroll through News Feed on the device you’re streaming from, so you can catch up on other stories while your video keeps playing on the TV; or you can find more videos to watch by choosing a new one from places like News Feed or your Saved tab.

And if you’re streaming a Facebook Live video to your TV, you can see real-time reactions and comments on the screen, and you can join in the conversation yourself by reacting or commenting.

Chromecast is a digital media player developed by Google.

The device is a 2.83-inch (72 mm) HDMI wireless adapter that plays audio/video content on a high-definition television or display by directly streaming it via Wi-Fi from the Internet or a local network.

CHECK:  How to Get Unlimited Dent Coins to Buy Free Data

Chromecast works with a number of apps including Netflix and YouTube. Apple TV is a digital media player and a micro-console developed and sold by Apple Inc.

It is a small network appliance and entertainment device that can receive digital data from a number of sources and stream it to a capable television.

Whether you’re hanging out with friends or just relaxing on the couch by yourself, Facebook hopes you enjoy this new way to watch videos.