President Muhammadu Buhari has written to the National Assembly (NASS), informing it of his desire to extend his leave in order to complete and receive the results of a series of tests recommended by his doctors.
A statement by President’s Special Adviser on Media and Publicity, Femi Adesina, said the president had since communicated his plan for the extension of the vacation to NASS on February 5.
“The President had planned to return to Abuja this evening, but was advised to complete the test cycle before returning. The notice has since been dispatched to the Senate President, and Speaker, House of Representatives. Mr. President expresses his sincere gratitude to Nigerians for their concern, prayers and kind wishes,” the statement said. 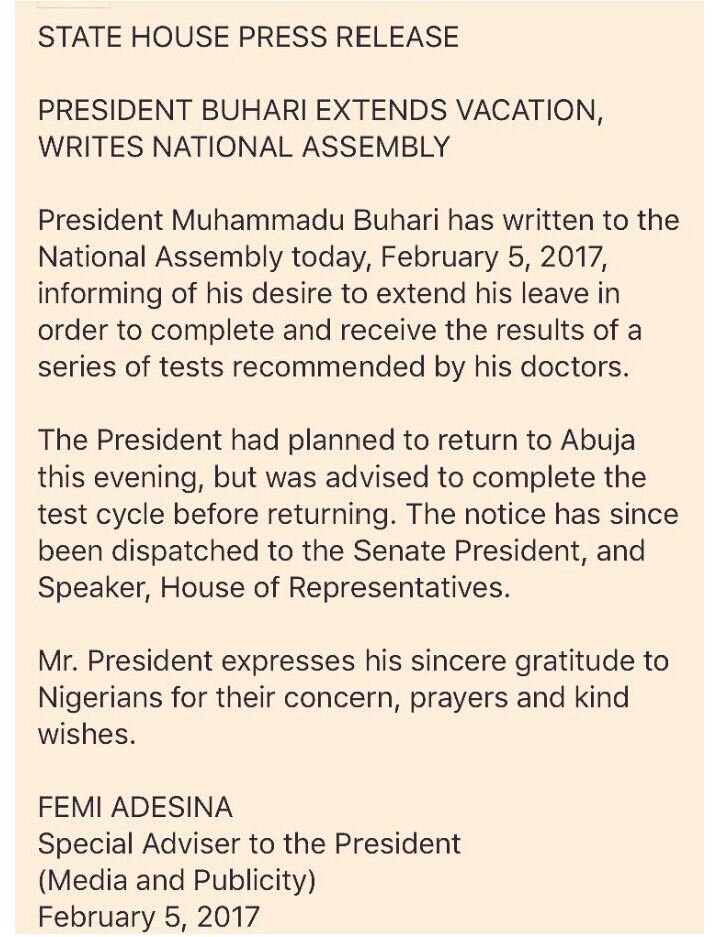 President Buhari left Abuja for the United Kingdom on January 19 on a short leave, which is part of his annual vacation.
The President formally handed over mantle of leadership of the country to his Vice-President, Prof. Yemi Osinbajo.
Meanwhile, the Minister of Information and Culture, Lai Mohammed has dismissed social media report that he spoke on the return of President Muhammadu Buhari.
He urged Nigerians to disregard the news attributed to him in which he was alleged to have said the president won’t be coming back on Febraury 5 as a result of faulty plane.
ALSO READ  Neighbours dared 17-year-old to jump to his death