Andrew Yakubu has forfeited the huge sum of money found in his secret safe in Sabon Tasha, in Kaduna town.
Justice Zainab B. Abubakar of the  Federal High Court sitting in Kano today ordered the forfeiture of $9,772,000 and £74,000 recovered from him to the Federal Government.
The order was sequel to an ex-parte application by the Economic and Financial Crimes Commission (EFCC)seeking an interim forfeiture of the recovered money to the Federal Government.
The ex-parte application was moved bySalihu Sani, counsel for the EFCC.
In her ruling, Justice Zainab held  that the money now in the custody of the EFCC are in the interim forfeited to the Federal Government of Nigeria. 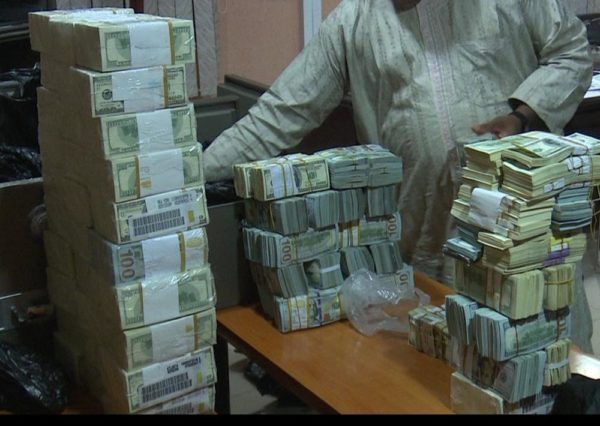 The money
On February 3, operatives of the Commission had stormed a building  in Sabon Tasha Kaduna City, belonging to the former NNPC boss and recovered the staggering stashed in a huge fire proof safe.
On February 8, Yakubu reported to the Commission’s Kano Zonal Office where he admitted being the owner of both the house and the money recovered.
Yakubu is still in custody assisting the investigation. He was the GMD ofNigerian National Petroleum Corporation (NNPC) between 2012 and 2014.
(Visited 1 times, 1 visits today)
CHECK:  “Yemi Osinbajo: When an Acting President Acts Well” – Reno Omokiri