Adama Barrow was on Thursday sworn in as the third president of The Gambia in an inauguration which took place in the country’s embassy in Senegal.
President of the Gambian Bar Association, Sherrif Tambadou, conducted the exercise as Barrow took the oath of office.
Barrow was relocated to Dakar by the ECOWAS Mediation Team led by Nigeria’s President, Muhammadu Buhari.
Ousted Gambian President, Yahya Jammeh, who had earlier conceded defeat in the December 1 presidential election, but later rejected the result of the poll, has yet to vacate office in spite of regional and international intervention.
Barrow, in his inaugural speech, said that there was no loser in the elections and called for national unity among all citizens. 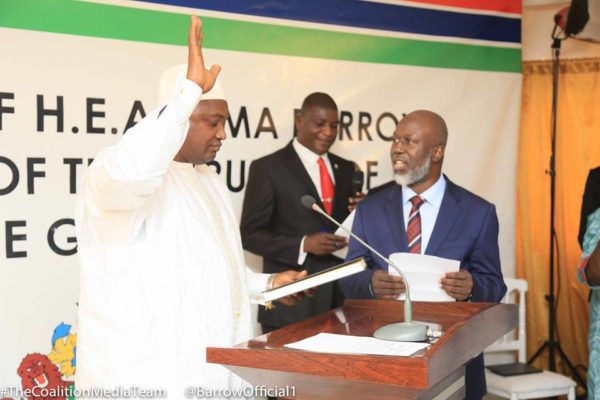 He also urged personnel of the Gambian Armed Forces to remain loyal to the Constitution.

“As Commander-in-Chief, I call on all personnel of the armed forces and other security agencies to be loyal to the Constitution and the Republic. As their Commander-in-Chief, I command all members of the Armed Forces to remain in the barracks and those found wanting or in possession of firearms without my command shall be considered rebels,” he said.

The president also said that his administration had developed a think-tank to put in place inclusive development, and urged all Gambians to “join hands to effect the change that will bring liberty and prosperity to everyone”.
Addressing Jammeh after the swearing in, Barrow said:

I am urging you to keep your word and adhere to the will of Gambians. You and I are age mates. On the date of my celebration in Gambia, I will invite you and formerPresident Jawara because we are all Gambians and you were here before me.

He commended the efforts of ECOWAS,African Union, United Nations and the international community for the efforts made to support the will of the Gambian people.
The inauguration ceremony was attended by ECOWAS Commission President, Marcel de Souza, ECOWAS Parliament President, Moustapha Cisse Lo and ECOWAS Commissioner, Political Affairs, Peace and Security, Alima Ahmed.
The Special Representative of the UN Secretary-General and Head of UN Office for West Africa, Mohammed Ibn Chambas, was also present at the ceremony.
Members of the diplomatic community were also represented. 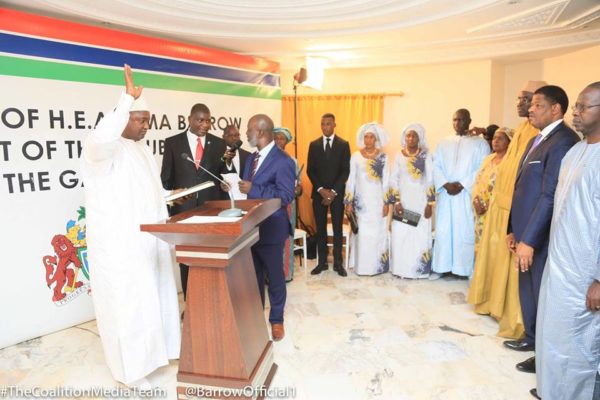 The UN Security Council has also affirmed that Barrow is now the legitimate President of The Gambia, declaring that “former President Yahya Jammeh is out”.
The President of the Security Council,Olof Skoog (Sweden), told the UN Correspondents after the adoption of the Resolution 2337 (2017) by consensus by the 15-Member Council.
The Resolution was sponsored by Senegal on the situation in The Gambia.
The Resolution by Senegal, sought the Council’s approval and support for ECOWAS to take all necessary actions to remove Jammeh and install Barrow as President.

“I just made a call to The Gambia’s President Adama Barrow to tell him that the Security Council is behind him and support him as the president. The Security Council affirmed support to President Barrow. The Resolution adopted just now is political.
There is a strong request to former president Yahya Jammeh to carry out peaceful transfer of power to President Barrow. The Council resolved that the will of the people of the Gambia as expressed on Dec. 1 must be fully respected. That is the message of the UN Security Council.
The Council urged all parties to exercise restraints. Jammeh is now out. The Security Council is now behind ECOWAS stands behind the efforts of ECOWAS to resolve the issue. The Council is following the events in The Gambia closely.
The Security Council has directed the Secretary-General to report to the Council within the next 10 days. We know as we speak, political efforts are still ongoing to resolve the crisis peacefully,” Skoog said after the adoption of the Resolution.

He said that the Council wanted the political crisis to be resolved as bloodlessly as possible and would have preferred a peaceful resolution, if Jammeh would heed the call.
The Members of the Security Council, who contributed to the debate of the Resolution, included China, Japan, Russia, U.S., Senegal, among others.
They all affirmed their support to the Resolution and expressed concerns on the consequences of Jammeh’s action on the civilians in the country, the sub-region and the region, as a whole.
(Visited 1 times, 1 visits today)
CHECK:  Nigerian Economy Is Already HIV Positive Before Buhari - Ohakim